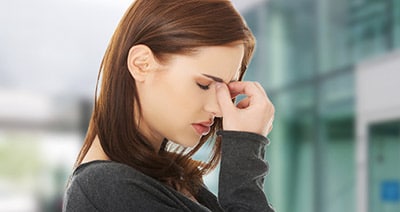 We’ve all experienced the common cold enough to be extremely familiar with its symptoms. Congestion, watery or light-sensitive eyes, and sneezing are nothing new–but the problem arises when these symptoms are accompanied by chronic pain, and when the “cold” lasts more than ten days. At that point, it’s time to call this cold impostor by what is likely its real name: sinusitis.

The problem with sinusitis is that it often appears to be a slightly more serious version of the common cold, which leads people to overlook it or allow it to run its course, which can make the sinusitis more severe and can even develop into a life-threatening issue (because the sinuses are so close to the brain). Sinusitis occurs when the sinuses, the air spaces in your head that regulate breathing, get infected, and the tissue becomes inflamed and swollen. This causes symptoms like a cough, fever, sore throat, nasal drainage, and more–symptoms that can easily be mistaken for a common cold. However, there are certain sinusitis symptoms that demand a visit to the doctors.

Interested in more information on sinusitis? Looking for Boise Ear, Nose, and Throat experts? Contact us at (208) 367-3320 today!