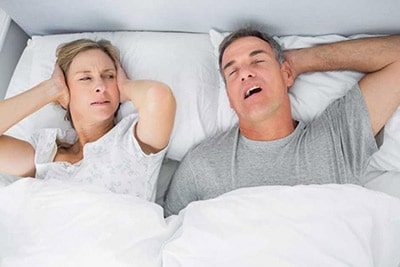 Do you remember watching cartoons when you were a child? Although we likely didn’t appreciate it back then, cartoons worked hard to show that an action was taking place in an animated world. For example, how did we used to know that a cartoon character was sleeping? The action of “sleeping” was conveyed using those little Z’s drifting upward–or, even more often, we were clued in by the sound of snoring. Why did snoring become a symbol for sleep? Well, the truth is that snoring is very common–almost half of all adults snore at least occasionally. Snoring occurs because the throat muscles relax during sleep, and the throat itself narrows, meaning that the internal tissue can vibrate and cause snoring sounds. Unfortunately, snoring is more complicated than those cartoons led us to believe–and it can cause big problems.

Sleep apnea and snoring are connected. People with sleep apnea stop breathing when they snore–and that can lead to poor sleep, chronic low oxygen, and eventual organ damage. Sleep apnea occurs in three forms. The first form is called Obstructive Sleep Apnea (OSA); this is the most common form, characterized by airway obstruction due to soft tissue closure in the back of the throat. Central Sleep Apnea is a rarer form, and it involves a communication failure between the brain and the muscles involved in breathing. The final form, Mixed Sleep Apnea, is true to its name–a mix of Obstructive and Central Sleep Apnea. No matter what the form, sleep apnea deprives the body of deep sleep and causes unsafe drops in oxygenation–and yet, most people don’t even know they suffer from sleep apnea. An Ear, Nose, and Throat Specialist can help diagnose sleep apnea.

So, what treatments are available for sleep apnea? What options are there? Here’s a quick look!

Interested in the connection between snoring and sleep apnea? Looking for a reliable Ear, Nose, and Throat Specialist? Contact us at (208) 336-4368 today!